A core of the IN SITU project is the interlink between research and practice through place-based IN SITU Labs: creative collaborative incubators – hubs for new projects, training, and networking initiatives.

The six IN SITU Labs are located in non-urban areas in countries located on the “periphery” of Europe and encompassing countries in both the south and north of Europe: 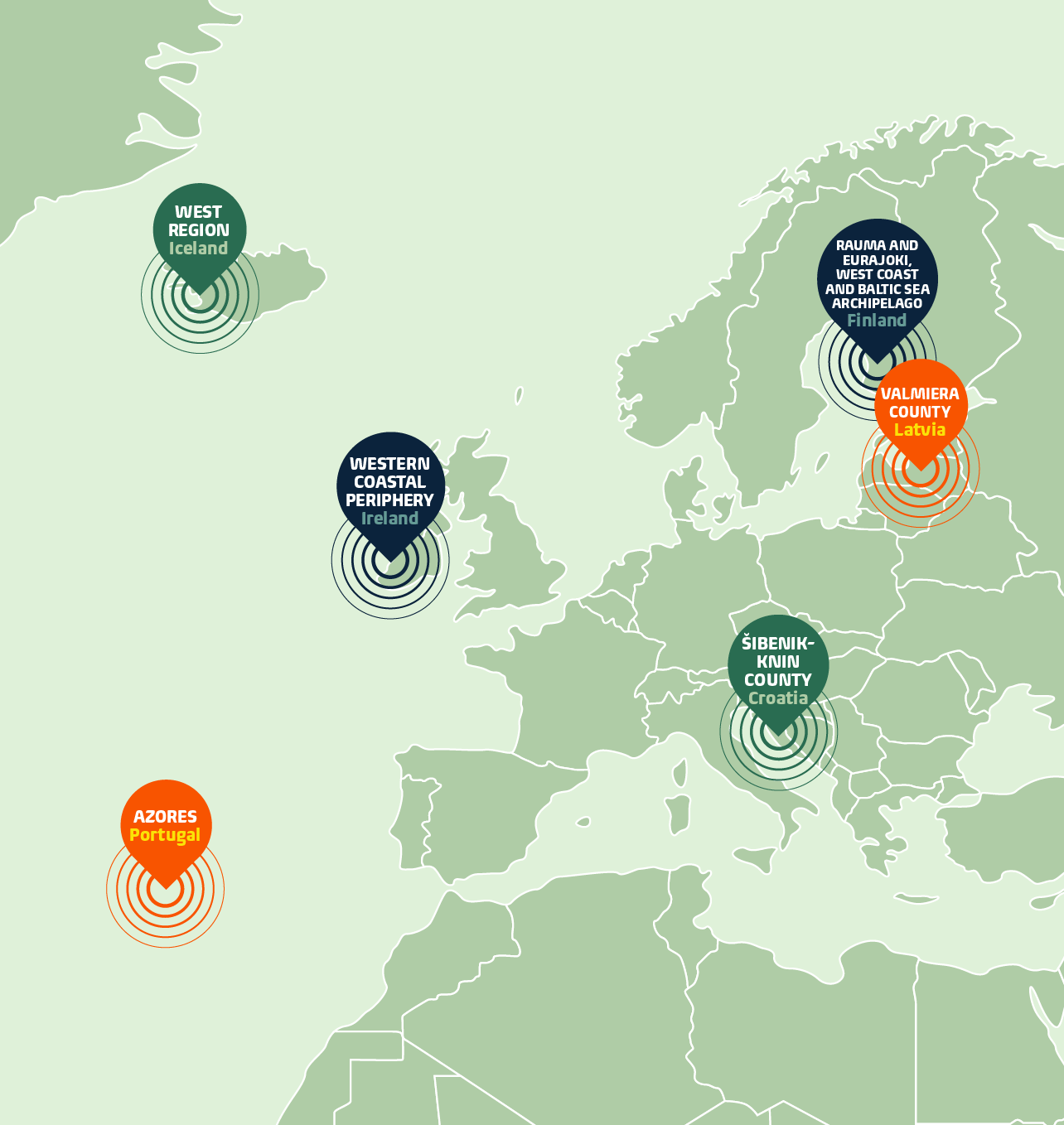 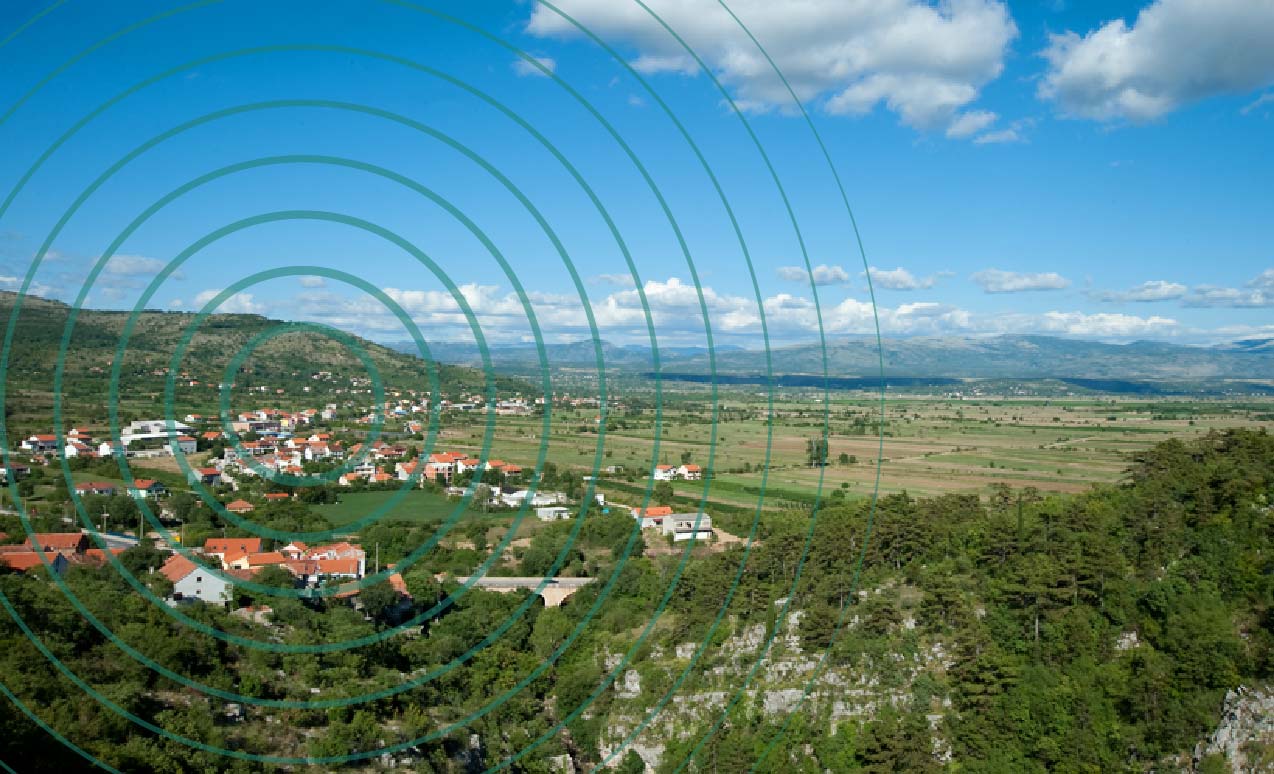 Participatory methodologies and place-based approaches inform the research to be conducted through the Labs. Project activities in the IN SITU Lab locations will include: 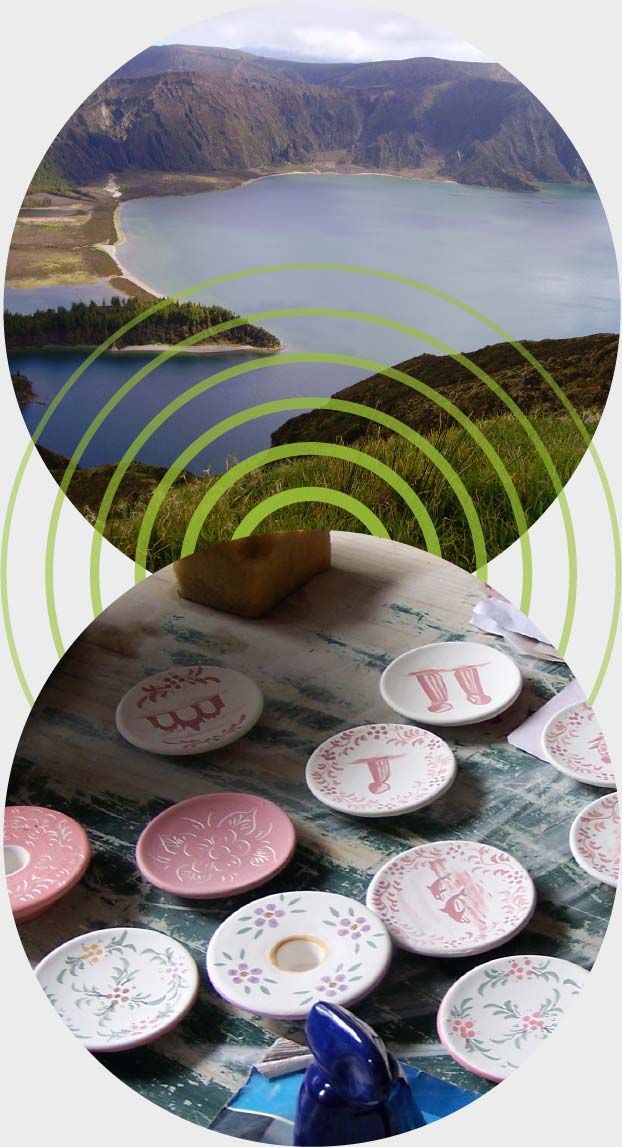 The Azores, an ultra-peripheral region of Europe, is an autonomous region of Portugal located in the North Atlantic, 1500 km from the European mainland. The archipelago is of volcanic origin and comprises nine islands and several islets which belong to three geographic groups. Approximately 237.000 people are resident across the nine islands (2021 Census). It is one of the four Portuguese regions (NUTS 2 level) belonging to the category of less developed regions.

The Azorean identity is marked by multi-generational migratory movements that created a wide-spread Azorean diaspora, predominantly in North America. Tourism has gained economic prominence in the Azores, based on its exceptional geological wealth and biodiversity, architectural, archaeological, and cultural heritage. The Azores is the first archipelago certified as a Sustainable Tourist Destination by EarthCheck, the entity accredited by the Global Sustainable Tourism Council. Agriculture also continues to play a dominant role in the regional economy.

Key issues identified for the cultural and creative industries (CCIs) in the Azores include: to professionalize business practices of cultural agents; to strengthen transversal and cross-sectoral work, and encourage discourse and debate among local actors and stakeholders; and to expand the mediation actions of the public authorities, among others. 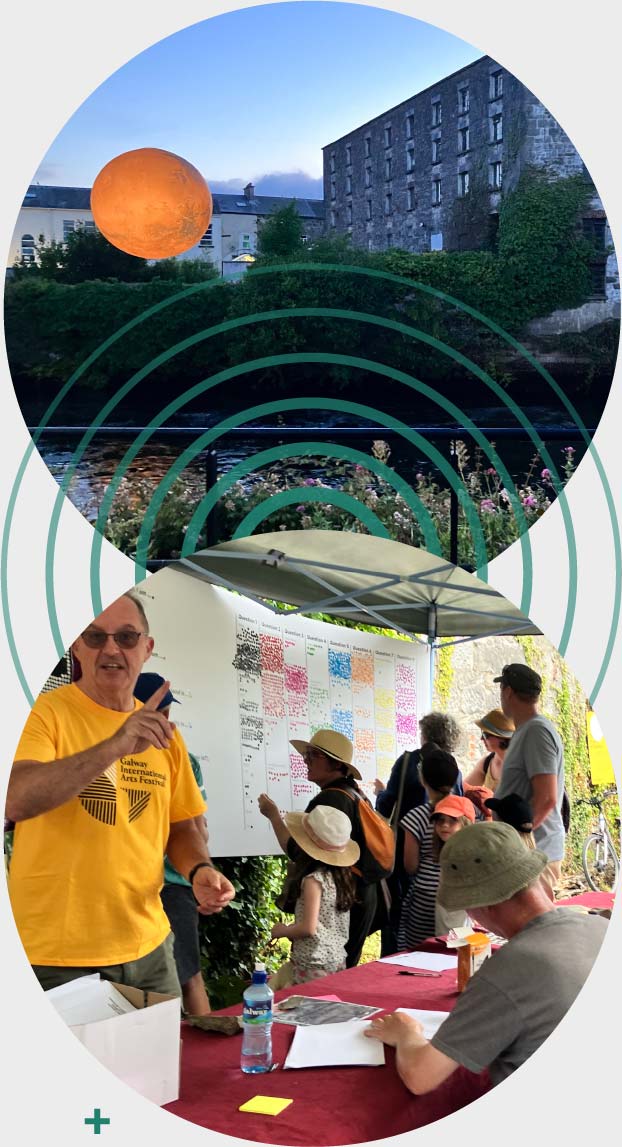 The land of this coastal periphery area, situated in the West of Ireland, contains a mix of mountainous and bog land. While oftentimes providing a dramatic backdrop, it has low agricultural productivity. A total of 450,000 people live in the region, which represents a low population density marked by a significant level of outmigration in the under 30s, especially in more peripheral places, with in-migration to larger urban settlements.

Key issues and challenges in the region are related to economic sustainability and the lack of opportunities and attractiveness for the youth of the region. The west of Ireland faces a dual threat of sustainability with high house prices and more limited job opportunities. Lacking in regional and local autonomy, the Regional Social and Economic strategy has placed an emphasis on sustainable development.

Overall, the west of Ireland has a relatively vibrant cultural and creative industries sector, which was responsible for just over half a billion euro in turnover in 2018. While inspired by its geography, it is also constrained by it. Key issues in this field are lack of connection, geographic remove, low networking opportunities, and infrastructure requirements. 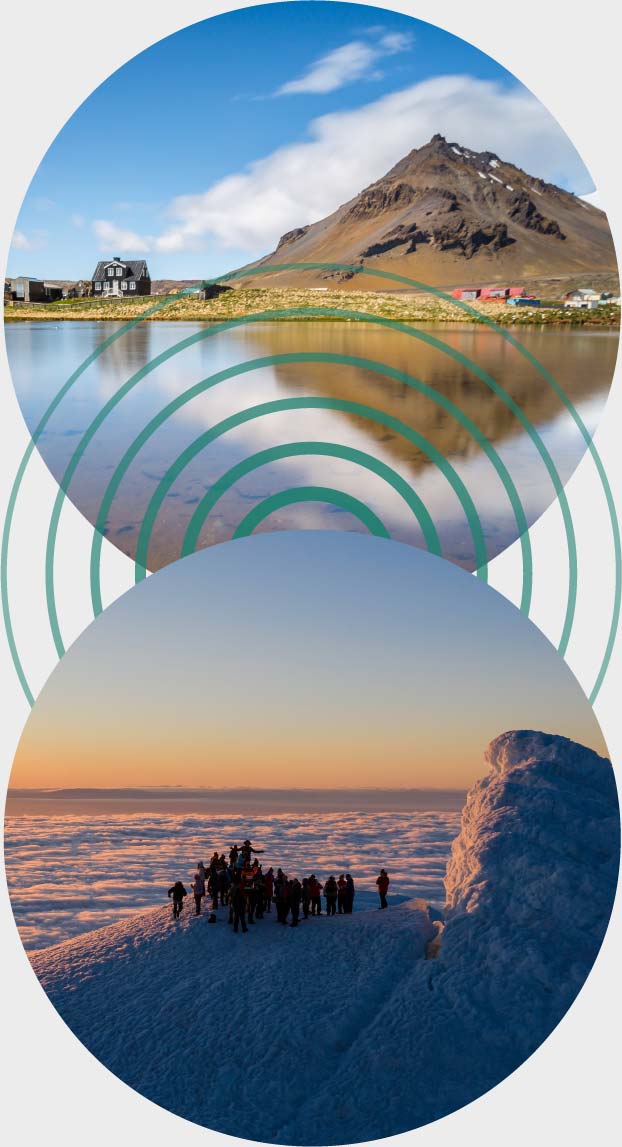 The West region of Iceland, located on the northern periphery of Europe, stretches from the sea to inland. West Iceland has vast nature, and within the area there are various beaches, glaciers, wetlands, and mountain areas. There is one national park and several listed natural monuments. The region is mainly composed of rural areas featuring nature, agricultural land, and seaside villages. There are 16.700 inhabitants in ten municipalities. The largest community in West Iceland is Akranes, in the southernmost part of the region, with 7400 inhabitants. 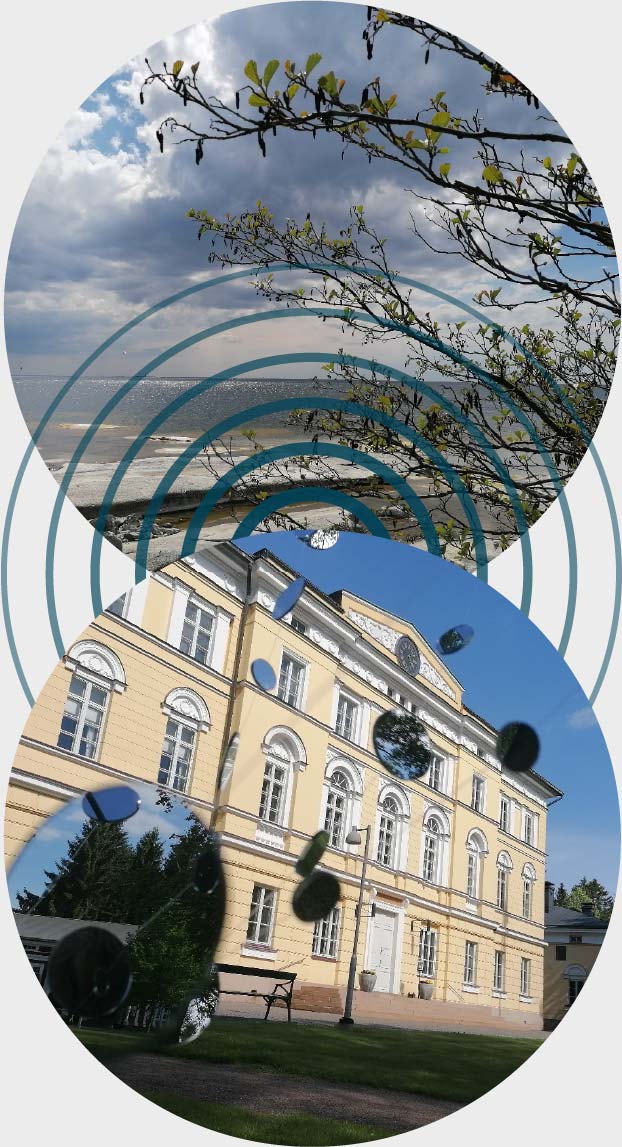 The cities of Rauma and Eurajoki are located on Finland’s West Coast. The region is a boreal/hemiboreal, old agricultural area with long historical continuity. It is accessible, close to the regional centre of Pori and a few hours away from major national centres. The rural landscape is a mosaic of fields, forests and settlements with a low relief. The adjoining Bothnian Sea archipelago is a fringe of smallish islands by the Baltic Sea that borders Sweden. There are about 30.000 inhabitants in the rural areas of the IN SITU Lab, mostly Finnish-speaking. The local level of employment is fair, the most important sector being services and the second primary production (agriculture and fisheries). There are less high education degrees than the national average. The City of Rauma has Mediaeval origin and the surrounding rural areas have varied and stratified cultural heritage. The Old Rauma and rural Bronze Age Burial Site of Sammallahdenmäki are World Heritage sites. There is also a national park in the Bothnian Sea archipelago. Local environmental pressures are related with the eutrophication of the Baltic and the impacts of large-scale wind turbine development. Eurajoki also has a nuclear power plant with a controversial spent nuclear fuel repository soon to be made operational.

Cultural and creative activities in the area include visual and participatory art, nature photography, music, dance, drama as well as traditional crafts such as carpentry and wooden shipbuilding. The overall number of rurally based CCI actors is small, self-employed or employed in small enterprises, and the respective fields of culture are diverse. There is good access to cultural institutions and services in the area or nearby cities as well as vibrant volunteer cultural activities. The network of development and voluntary organizations is active in the region. However, the CCI field is fragmented and has no clear strategic goals in the current situation. Stronger connection is needed between CCIs, different actors in local and regional planning, and tourism and conservation actors. Meanwhile, awareness about the significance of CCI actions to strategic goals in the local and regional context is increasing, with culture and cultural heritage being recognized as resources for well-being, social resilience, and the integration of immigrants. Maritime cultural and natural landscapes and cultural heritage sites are seen as specific pull factors for the local economy. 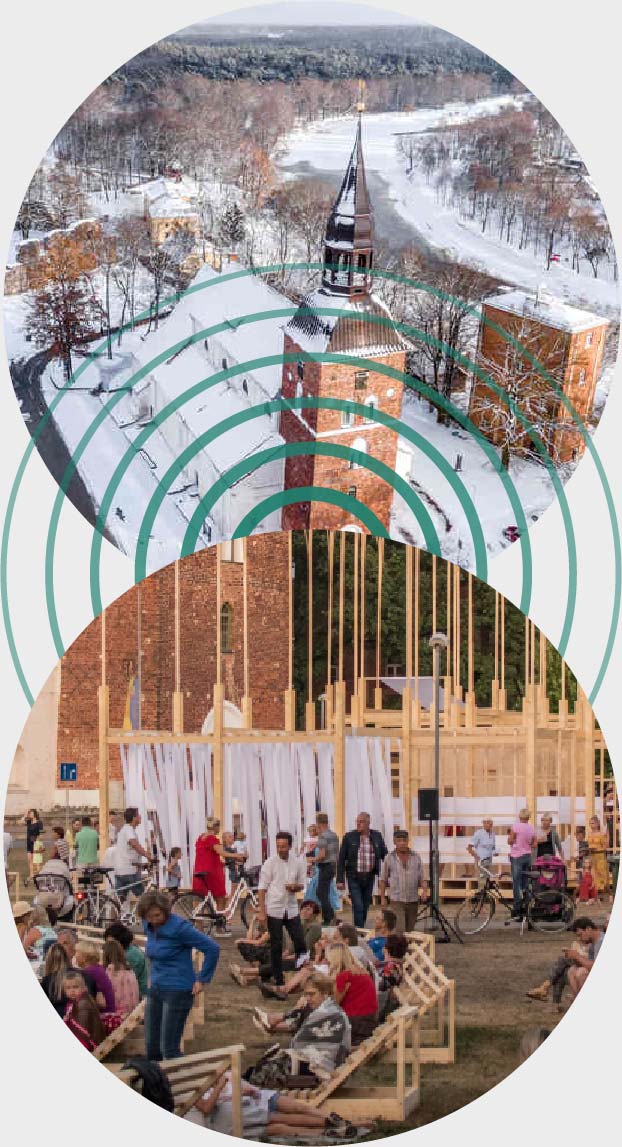 Valmiera county is located in the northeastern European periphery, inland, on the border with Estonia. The city of Valmiera is an old medieval town, and a member of Hanseatic league. Unfortunately, the built cultural heritage has been lost, as almost all historical buildings have been destroyed, many of them during World War II. However, Valmiera also features rich industrial traditions and leads the nation in output produced per capita. Valmiera is also a recognized sports centre.

In 2021, the regional administrative reform united the city of Valmiera with its surrounding territories, resulting in the need to reorganize the governance of all fields, including culture. Key issues and challenges in the county are connected to this reform and reorganization process.

Overall, Valmiera county has a total of 54.642 inhabitants; the county’s urban centre, Valmiera, has 23.000 inhabitants (46%) and its rural surroundings contains four very small towns and villages of 31.000 inhabitants altogether (54%). The number of inhabitants is decreasing (as in the whole country).

The potential of the cultural and creative industries (CCIs) has been traditionally undervalued, and the development of the CCIs sector has only recently arrived on the public agenda. In 2021, Valmiera is on the shortlist for the title of European Capital of Culture 2027 and has prepared a long-term cultural strategy, including planning interdisciplinary cooperation with other sectors.

Valmiera county has a rich cultural heritage (~100 CH sites, 310 craftsmen), a state theatre and a renowned theatre festival, 176 municipal cultural institutions, and ~50 creative enterprises. These resources can form a base to foster the competitiveness of Valmiera county, strengthening the links between industrial and creative sectors. Key issues identified in the area’s CCIs sector are related to limited cultural tourism (Valmiera county is not among the popular destinations), no systematic support for the development of creative industries, and limited international exchange. 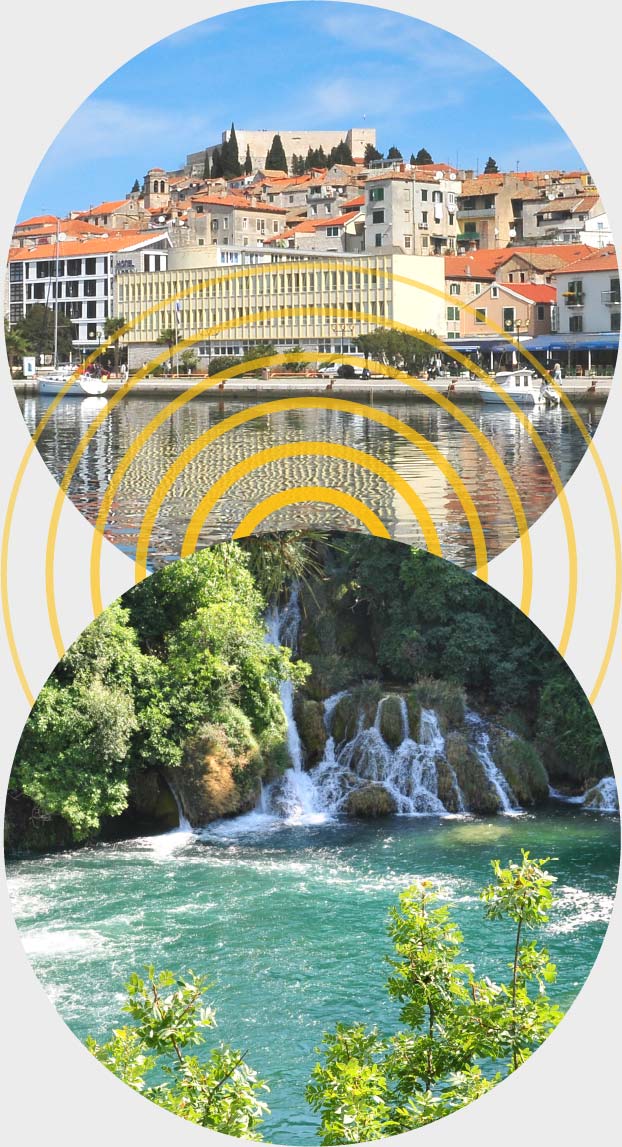 Šibenik-Knin County is situated in the southeastern European periphery, on the Croatian Adriatic Coast. The total area of Šibenik-Knin County is 5,670 km2 (2,994 km2 land, 2,676 km2 sea) including 285 islands. The Šibenik-Knin County has 96.624 inhabitants and Šibenik (administrative centre) has 42.589 inhabitants (2021 statistics). The economic and transport isolation of this area has conditioned negative demographic and socioeconomic trends that are expressed in higher at-risk-of-poverty rates.

Generally speaking, key issues and challenges are related to the great pressure of tourism during the tourism season as most environmental burdens are caused by tourism. Environmental pressures are largely defined by increased air emissions and water usage, higher concentrated amounts of waste, increased noise and traffic, and the construction of infrastructure. Other issues are connected to the fact that large part of the natural heritage is not yet valorized, there is a high level of use of conventional energy sources in industry, the existence of areas with suspected mines, a low share of separated collected waste, and high risks of fires, earthquakes, floods, and droughts.

In terms of cultural characteristics, the focus of the area is on the preservation and valorization of its natural and cultural heritage based on the sustainable governance of its rich archaeological heritage, concentrated in the coastal local communities. Different cultural and creative industries (CCIs) actors operate in the county, with the public institution Fortress of Culture Šibenik is a key organization. This organization manages two revitalized Šibenik Fortresses and House of Arts Arsen, the city stage for music and stage events, cinema screenings, plays, and exhibitions.

Key issues identified in the CCIs sector are: the lack of financial capacities of stakeholders, especially civil society organizations and freelance artists; artists’ under-capacity to cope with administration and complicated legislation; brain-drain, insufficient, and underdeveloped human resources; a lack of working spaces, especially for civil society organizations; the need for better intersectoral cooperation and stronger municipal support to realize the potential of the cultural and creative industries in the region.

Interested in engaging with IN SITU? Twice each year, receive updates about the project, its events, and new resources.

The IN SITU project has received funding from the European Union’s Horizon Europe research and innovation programme under the grant agreement no. 101061747.

We use cookies on our website to give you the most relevant experience by remembering your preferences and repeat visits. By clicking “Accept All”, you consent to the use of ALL the cookies. However, you may visit "Cookie Settings" to provide a controlled consent.
Cookie SettingsAccept All
Manage consent

This website uses cookies to improve your experience while you navigate through the website. Out of these, the cookies that are categorized as necessary are stored on your browser as they are essential for the working of basic functionalities of the website. We also use third-party cookies that help us analyze and understand how you use this website. These cookies will be stored in your browser only with your consent. You also have the option to opt-out of these cookies. But opting out of some of these cookies may affect your browsing experience.
Necessary Always Enabled
Necessary cookies are absolutely essential for the website to function properly. These cookies ensure basic functionalities and security features of the website, anonymously.
Functional
Functional cookies help to perform certain functionalities like sharing the content of the website on social media platforms, collect feedbacks, and other third-party features.
Performance
Performance cookies are used to understand and analyze the key performance indexes of the website which helps in delivering a better user experience for the visitors.
Analytics
Analytical cookies are used to understand how visitors interact with the website. These cookies help provide information on metrics the number of visitors, bounce rate, traffic source, etc.
Advertisement
Advertisement cookies are used to provide visitors with relevant ads and marketing campaigns. These cookies track visitors across websites and collect information to provide customized ads.
Others
Other uncategorized cookies are those that are being analyzed and have not been classified into a category as yet.
SAVE & ACCEPT
Powered by